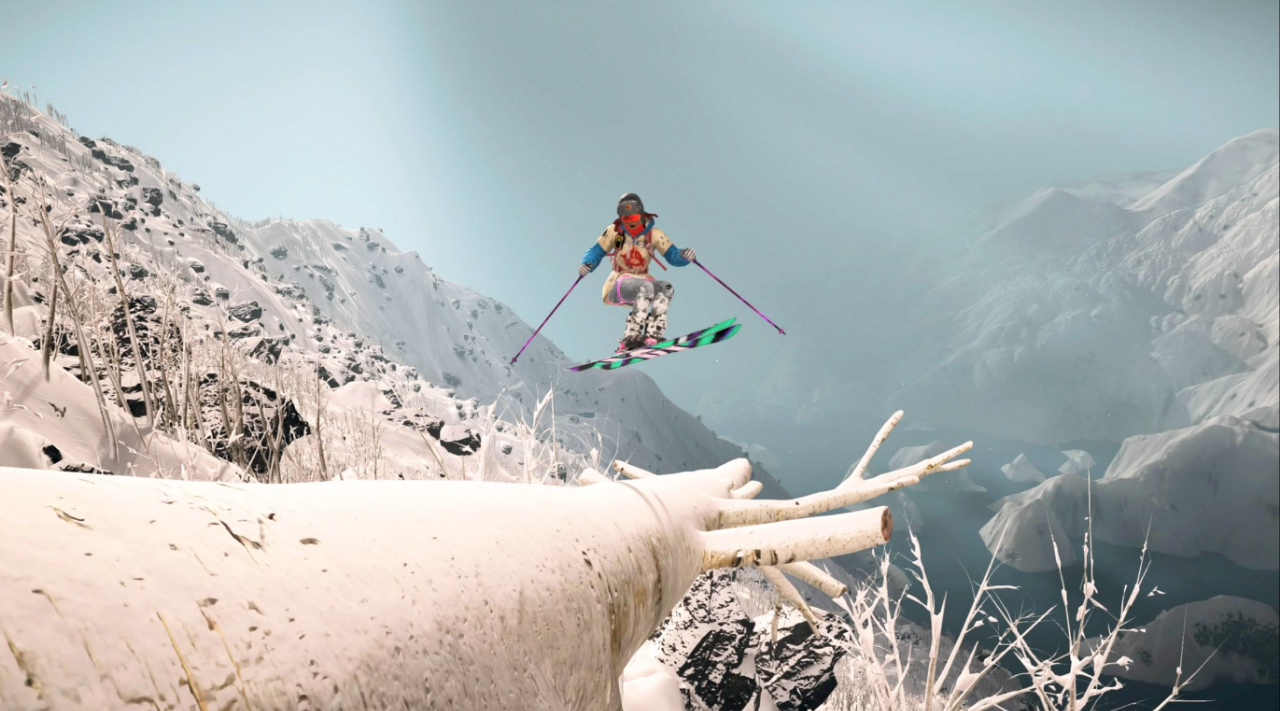 Steep (Ubisoft Annecy, 2016) has the worst UI of any game I've played for hundreds of hours. The menus are overbearing and inconsistent. Using the map feels like a claw crane trying to pick up chopsticks. But then I pop off the lip of a ridge, over some rocks, see the rest of the mountain range rising in the distance, that I'm 20 feet off the ground, hear an Assassin's Creed eagle shriek (the game's way of signifying seriously big air), and all the finicky menu shit disappears.

I didn't realize how important Steep was to me when it released in December of 2016 until I sat down this week to write something about it and started looking backward. December '16 and the following months were rough. My partner and I were adapting to life as (and the stresses of) being homeowners, my work was less about making money than stemming losses, and there was that other thing that happened in November. I was depressed, sleepwalking through the holiday season, spending far too much time hopeless-posting on twitter, and in a really rough place.

I wasn’t reading anything, watching anything, or listening to music. The only thing I was playing was Steep. I played Steep nightly, usually with the windows of my apartment open, under a blanket. It sounds goofy but having the cold air blowing in was transportational, and it makes sense that all I wanted to do was be cruising some fresh powder in the Alps. 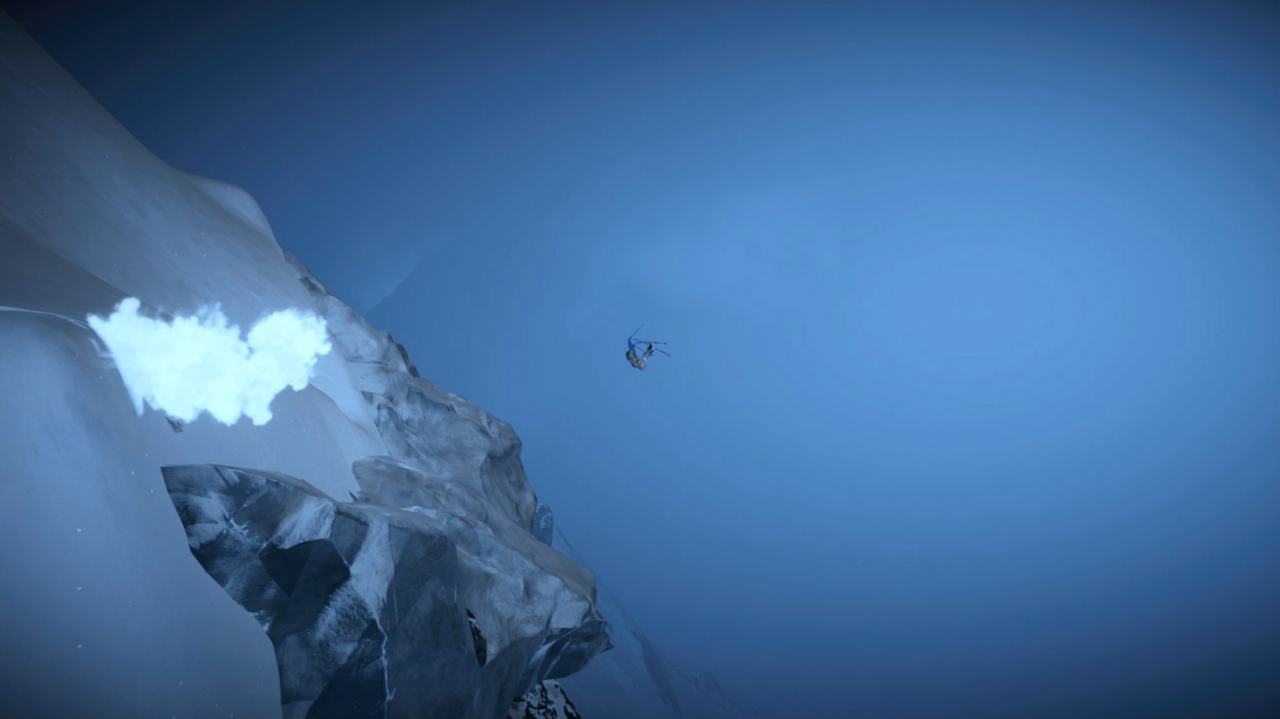 Steep thrives on the ease of repetition, just press triangle to restart in search of a better, eventually perfect, run. Press circle and go somewhere new. The tightness of this loop was perfect for getting me to a flow state that allowed me to lose hours, nights, weeks looking for fun lines and then running them to my continuously increasing standards.

Failure lost meaning as I continued to hit triangle because I knew I could do better, and over time I began to take comfort in the fact that even the best runs end in crashes. I would spend nights with the goal of activating a particular sound glitch that happens when the game thinks you are going to crash (because you’re going too fast or falling too far) but you nail the landing; two audio queues play on top of each other, one of your character screaming and terrified, the other of your character laughing and ecstatic. I'd wipe out 49 out of 50 times and put the 50th on youtube. 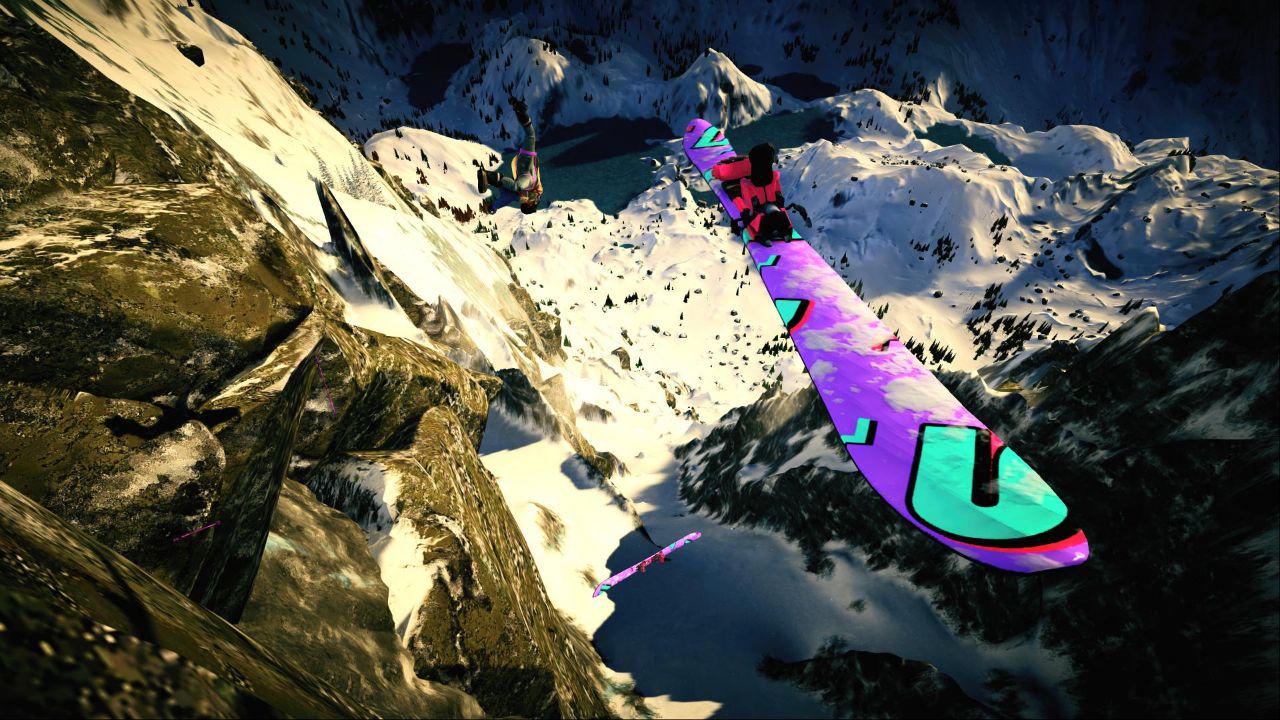 Steep was all I played in those months. But then I stopped: time passes, we adapt, Nier: Automata and Breath of the Wild dropped. I stepped away but Steep kept it moving. Steep released Alaska for free. Steep Released the Grind Mechanics as part of a Winter Olympics / Asia DLC. Steep released an X-Games DLC. I didn't play any of them.

It’d be remiss not to mention that in the interim from then until now I sought and got help from mental health professionals.

FFWD to January 2019. Steep is free on PS+. Friends are playing Steep (!) which was always a solitary experience for me. Unrelatedly, a few days ago a friend of mine said, “AOC makes me feel good and hopeful and brave in a way I haven't felt in a very long time.” And, same. With these new contexts, I realize I'm ready to return to Steep.

Problem: I changed my PSN tag to match up with my Discord tag when Destiny 2 released and played Steep before that. And I'm not sure if I have it in me to unlock everything again. Going back to the Alps, to perfect the same runs and discover the same locations I'd spent nights and weeks on two years ago (read: nearly everything) isn't appealing. Solution: I'm really good at this game and I have never played Alaska or Asia. 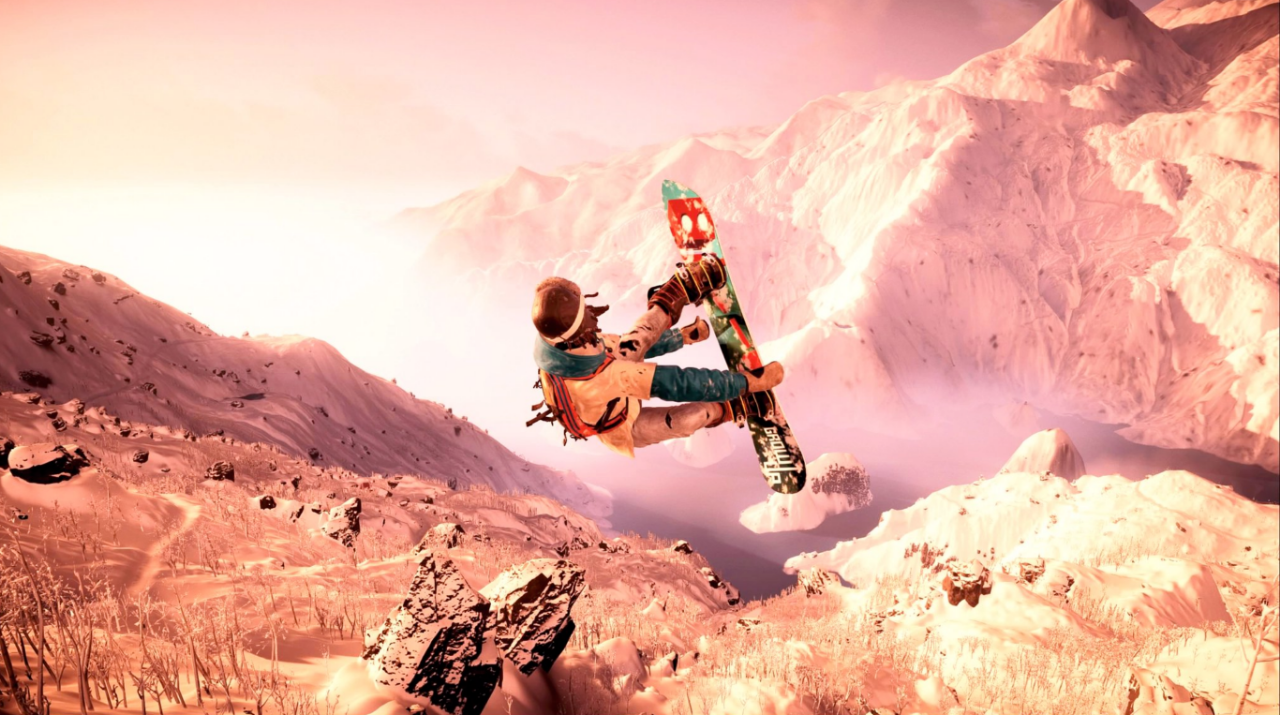 The new-to-me Story Mode: Road to the Olympics is a three to four-hour-long training montage of challenges interspersed with videos (that I skipped) of Olympians talking about what it takes to get to the highest levels of competition in a 30 for 30 style treatment, followed by the Olympics themselves. It was the perfect way to get reacquainted with the game, and Asia is gorgeous. The mountains feel ineffably distinct. Is snow different in Japan than in France? The foliage and architecture are (ofc). Are the runs just unfamiliar or do the mountains' forms diverge on a volcanic level? 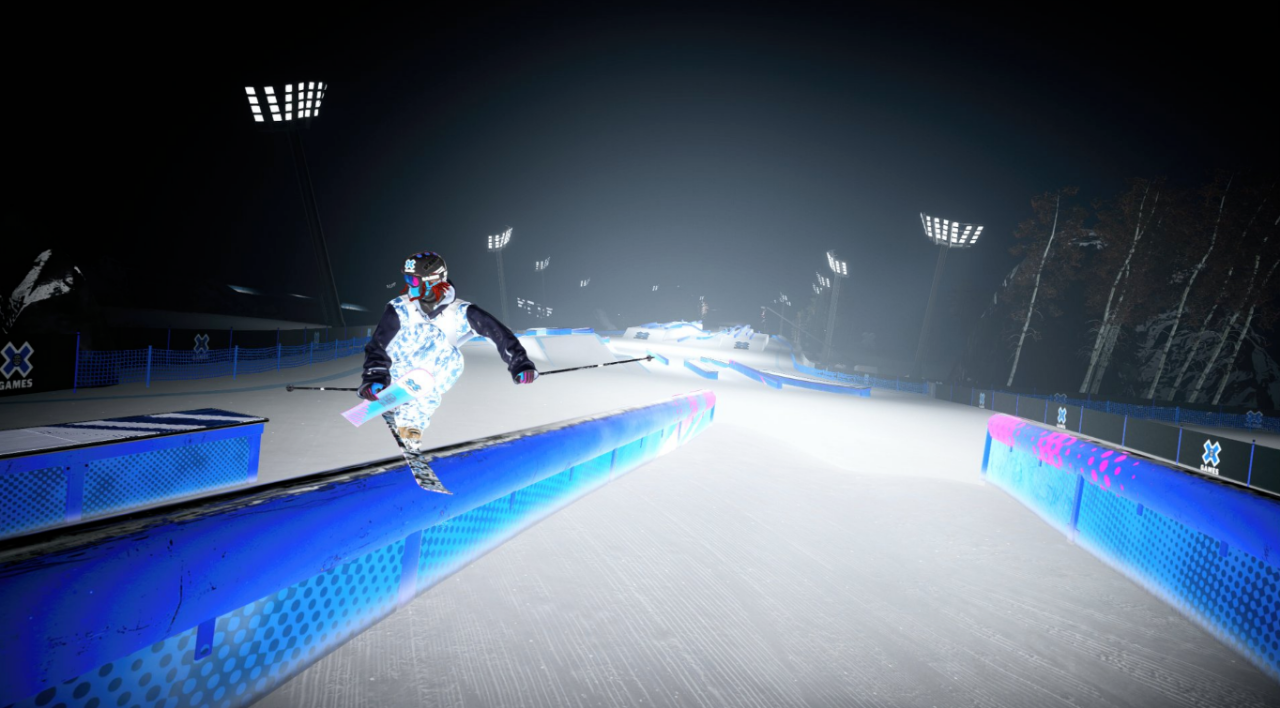 On a night I was stacking up Olympic and X Games Gold Medals, a couple of friends were on and just starting out. Every time they asked 'how do I do....' in the menus I laughed and said, “It's Steep. Just imagine the worst way to do it, that's the way to do it.”

Despite hundreds of hours in this game, I'd never grouped up with anyone until this week. We went to Alaska. I led them through some trick challenges and then we tried to do a race through a town. It was as much Gang Beasts as it was snowboarding; crashing into each other through narrow alleys, stairwells, and in between row-houses, towards a finish line that we weren't sure exactly where it was, was hilarious.

We fast traveled higher up a mountain and put on Rocket Wingsuits, a piece of equipment I had not used before. The rocket wingsuit makes me wonder if Ubisoft is using Steep to test out traversal mechanics and makes me excited for Anthem, because I hope Anthem feels like Steep's Rocket Wingsuits. We spent 20 minutes trying to crash into each other. Then we went to some other line, did it a couple of times, and called it a night. It was a blast.

I’ve played more since I started writing this: I’m using the Anthem-ass Rocket Wingsuit to explore and unlock new zones and drop-in points, which is much easier than the “trudging through the snow” method I had to use at release. I’m continuously exploring Alaska and Asia, I’ve gotten very into photo mode, and I’ve even gone back to the Alps to speedrun some challenges. I’m excited to be playing Steep in different, more hopeful circumstance, and to be able to share these mountains that I plan to visit often, but not for escape. 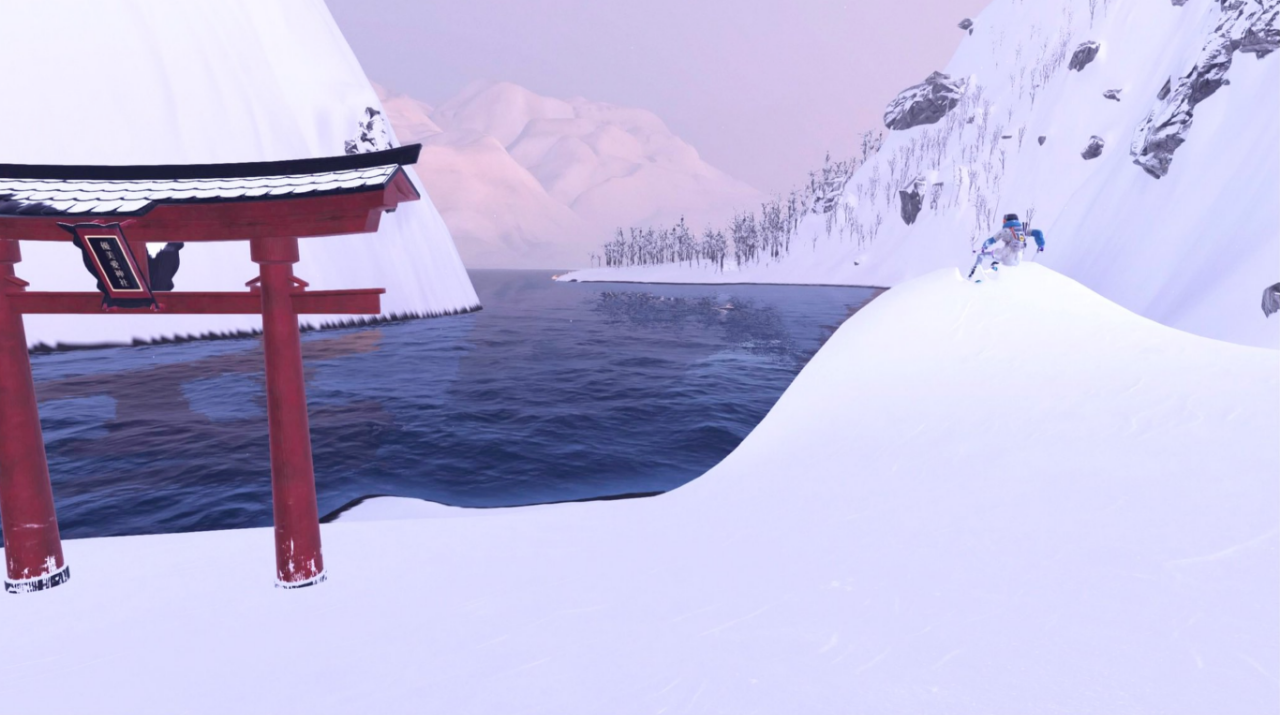 Florence is a game I'd heard about everywhere, for a while, but Dante Douglas' End of Year List was what convinced me to play it. I played it on the subway ride to the gym, and then while walking from the gym to the Home Depot to pick up a water aerator for my partner and my bathroom faucet (who can say how I lost the last one), and then finishing it on the subway ride home.

There's something to be said for playing an Act (~3-6 minutes long) throughout the moments in transit of my Wednesday Routine-plus-an-errand, but as I'm turning it over in my head, I'm not quite sure what.

I really liked everything about Florence, despite guessing what the ending was going to look like pretty early on. The interactivity, though simple, does an excellent job to convey the day to day aspects of her life, her routine, her work, and when the game subverts the routines you've built up, combined with the music mimicking the rhythms of conversation (while falling in and out of love), the effect is potent.

The moments that will stick with me the most were the way the conversational game changed to mirror the emotion of the conversation, and the gameplay mechanic regarding moving and moving out. That one hit hard.